How to Put Out an Electrical Fire 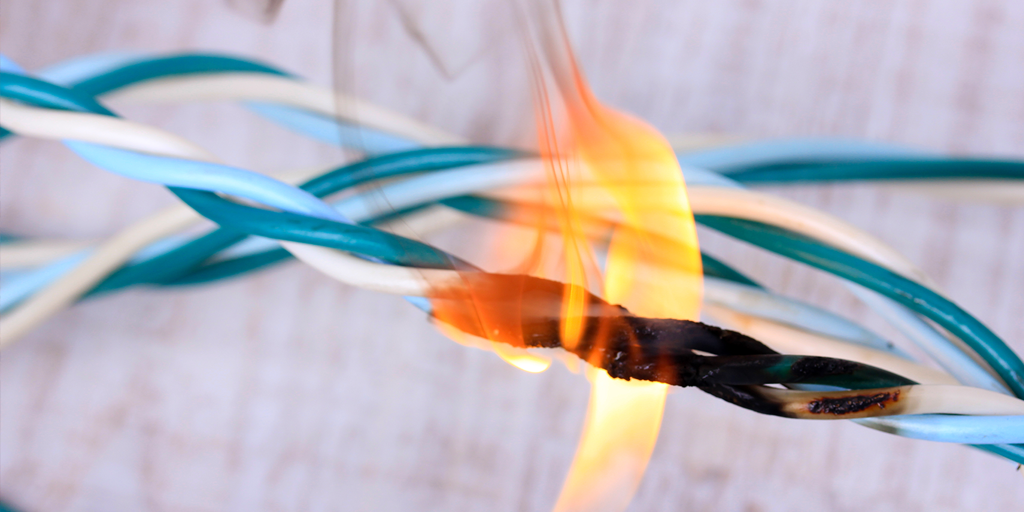 Knowing how to put out an electrical fire could mean the difference between a few frantic moments and a fire you cannot control. And while it might be tempting to treat all fires equally in our actions to put out the flames, this couldn’t be further from the truth.

Here’s how to put out an electrical fire and how you should handle the flames.

Knowing How to Put Out an Electrical Fire

Did you know there are five classes of fires? These classes are divided into groups A, B, C, D, and K. Class C fires, or electrical fires, are caused by old or faulty wiring, frayed cords, electrical arcing, and defective appliances. Class C fires often lead to Class A fires, which are the most common and involve ignition of solid combustibles like wood, cloth, paper, trash, or plastic.

Cutting the Power
If any class of fire is developing out of control, even if it’s small, it’s better to be safe than to be sorry. First, call emergency services, and let the operator know you’re dealing with an electrical fire if you’re sure that is the case.

If an appliance, such as a toaster, is on fire, you’ll want to cut its source of power. Unplug the cord or appliance, so long as it is safe to do so. Unplugging it will help reduce the risk of the fire spreading beyond the appliance itself.

If an electrical fire has broken out inside a wall or even in an appliance you cannot reach to unplug, shift your focus to getting to the electrical panel or switch to turn off the power. Doing so will help reduce the risk of electrical shock and allow you more options to safely snuff out the flames while help arrives.

If it is unsafe for you to reach the source of power, do not attempt it. There are other ways to fight the fire, even with the power still on.

Putting Out the Flames
Electrified fires are more dangerous because you’re not only battling flames, you’re faced with another dangerous element: electricity. When any class fire breaks out, it can be tempting to douse the flames with water. However, this is not how you handle an electrical fire when the power is still connected. If you’re unsure if a fire has been caused by live electricity, err on the side of caution and avoid using water.

Luckily, there are other, safer options for taking out small electrical fires. Smothering flames with baking soda is an effective method, as the granules block the flow of oxygen needed to fuel the fire. Baking soda does not pose a hazard like water when power is still flowing to the appliance or affected area.

Every household should have a fire extinguisher handy in the kitchen—but you should be sure of its purpose before ever needing to use it. Only use fire extinguishers labeled for Class C fires or those that are labeled ABC. Chances are, the extinguisher you have in your home is either of these, but it never hurts to be sure before you may need it.

Just remember to remain calm throughout the process. Panicking can result in unfiltered action that could be potentially dangerous. If a fire is too large to control, exit to safety and wait for emergency services to arrive. After all, your safety is the most important. But knowing how to put out an electrical fire in advance could save your home, your belongings—even your life.

Electrical fires can be caused by a number of electrical problems from faulty wiring to appliances. If the electrical system in your home or business has not been updated in more than 20 years, it may be time for a rewire or electrical inspection. Call Eric Krise Electric to set up your free quote or to schedule a rewire or inspection: 856.769.3932.